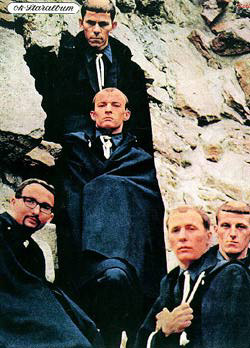 The new year starts with sad news already! Dave Day, the mad banjo-player of The Monks is dead! He died on Januar 10 of a heart-attack in his hometown Renton, WA. As sad as this message is to the many fans of The Monks, it was probably a great departure for Dave! He’s now reunited with his idol Elvis! Plus at the end of their lives the circle completed for both Dave and the late Roger Johnston, the original drummer of The Monks who died in 2004 already. On Monks-concerts in the States and Europe since 1999 both of them must have felt how much their music meant to their old and young fans all over the world. Unfortunately I was never able to see Roger but if you’d seen Dave’s grin after the Berlin and Franfurt-shows… He was happy and these shows, I’m sure, meant a lot to him. To me too! They belong to those milestones I was allowed to witness live! Play on for us in heaven, Dave! The unbelievable album of The Monks you’d find in the Rock’n’Roll/ Beat/ Rhythm & Blues/ Bluesrock/ Southern Rock-section, if you still missed out on it! It’s a definite must-have! And if you want to know more about Dave get yourself the book “Black Monk Time” by Monks-bassplayer Eddie Shaw.

It’s still THE best report on the German “Beat-Scene” of the 60’s!!