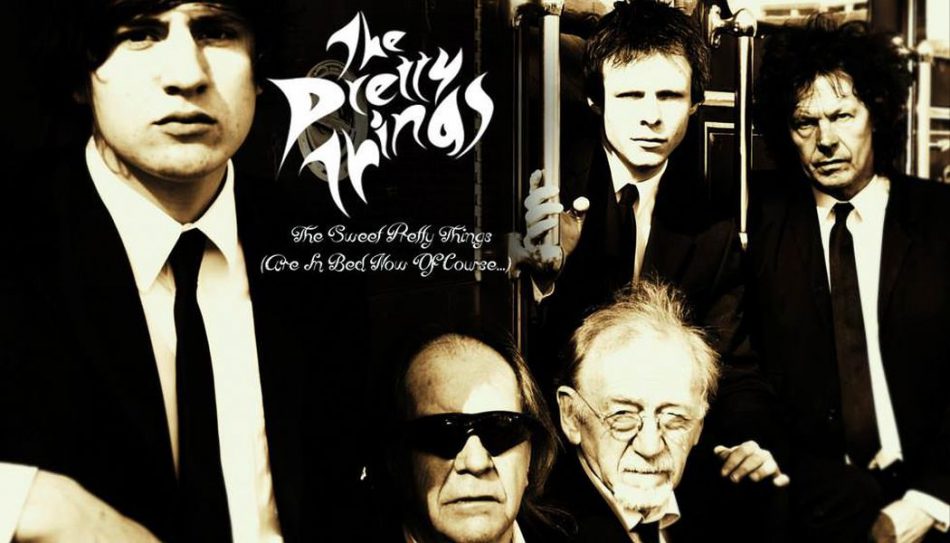 I could list dozens of reasons why the Pretty Things are still one of the world’s best bands. At least they are one of the longest standing still active bands in history besides The Rolling Stones or The Beach Boys. But concurrently they probably managed to age with the most dignity. “Rage Before Beauty” from 1998 was already a late work that could easily tie in with the best of earlier Pretty Things albums. But their latest “The Sweet Pretty Things (Are In Bed Now, Of Course…) is an undisputed masterpiece on which they outdo themselves and which sounds to me pretty close to their best album “S.F.Sorrow”. And I don’t use such an equation carelessly since “S.F.Sorrow” is still one of the three best British Psychedelic albums of all times (besides “Piper At The Gates Of Dawn” by Pink Floyd and “Before The Dream Faded” by Misunderstood)!

The opener “The Same Sun” already creates the same atmosphere like the ’68-album. For a live-version from the Burg Herzberg-Festival 2015 click here: Burg Herzberg . “Renaissance Fair” is a cover of one of the best Byrds-songs (on “Younger Than Yesterday”) and “You Took Me By Surprise” has The Pretty Things as the incarnation of the late Seeds in best “Parachute”-vein. But no later than “Dark Days”, the last track on the A-side, Phil May & Co have finally fallen into the hookah. From there on you’re gonna hear the most psychedelic Pretty Things-excursions since the days of “S.F.Sorrow”, “Philippe De Barge” and some Electric Banana-tracks.
“Turn My Head” is a re-recording of an old 1967-recording (you could listen to the original version on the “BBC Sessions”-CD which is upcoming on vinyl pretty soon on the same label) that easily stands the same quality as the original. “Greenwood Tree” is pure Psychedelia! “Hell, Here And Nowhere” has definitely more in common with “Loneliest Person” than just the same issue, though the old guys sound more optimistic than that now! “In The Sower” is a nice Instrumental by guitar-player Dick Taylor and “Dirty Song” ends the album in a proper style as “Old Men Going” did in the old days.

Nearly all songs on “The Sweet Pretty Things” could become future classics if it were not for the main-men Phil May and Dick Taylor being in their 70’s already. It’s a bit similar to the latest Rolling Stones studio-album “A Bigger Bang”! But “The Sweet Pretty Things” is no elder gentlemen’s album but a self-confident statement of a working unit. ‘Cause the other musicians from longtime guitarist Frank Holland to George Woosey on bass and Jack Greenwood on drums – the latter two could easily be the grand-children of Taylor & May – all have their right share in this fantastic album. It’s actually like their manager Mark St.John wrote in the liner-note: „This album sounds like The Pretty Things – vintage 2015 – and in fighting form.“ Indeed, and it’s even more impressive when you know that Phil May was in hospital not even six months before the sessions with a live-threatening bullous emphysema. Obviously here’s someone shouting a full-blooded “Fuck You!” to the Grim Reaper. Respect!!

for “The Sweet Pretty Things (Are In Bed Now, Of Course…) and more music by the PRETTY THINGS click here:  Pretty Things